Confession: I'm one of those guys that like to reinvent the wheel.
Because the wheel you have made yourself is always rounder than any other wheel in the world, right?

So... After my little "button" class I decided to give existing Amiga GUI frameworks another chance, because I had the feeling I was trying to solve a problem that was solved at least a dozen times before.

The one Gui framework in the Amiga world that is impossible to miss is - of course - MUI: the Magical user interface.

And from a developer perspective, I now know why.
It is simply really really well made.

No wonder it's the default, and it's even supported out of the box on OS4 and Morphos.
So - unless you're targeting kickstart 1.3 - you would be a fool not to use it, right?

To use it as C developer, you need the C includes you can find here.
All the examples includes are made to be compiled on Sas/C so - indeed - they work out of the box. How nice is that!?!

Very very very nice and super easy to use ...
I still have this nagging aversion of "dependencies" in your software, but is there any OS3 user that doesn't have MUI installed? Don't think so...

Note to self: about those "includes" in C: is there any way to keep track of where they come from, maybe by putting them in seperate include folders?
Now I just copy the MUI include files to my main C include folder and it magically works (See what I did there? :-) ) but what If I want to compile my program in 10 years on a new system? how would I know what includes I need exactly?

Poking around the MUI example files I found something very striking ... the "KnobsControl" class. 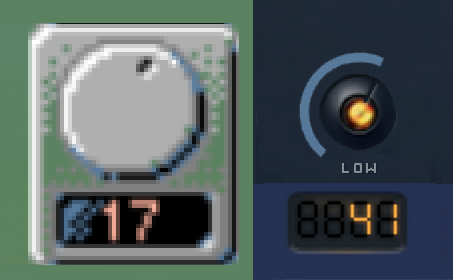 On the left is the MUI knobs control class, on the right is the knob and number-display I made for BassoonTracker.
Isn't the resemblance striking, especially with those orange numbers in the rounded box?
I honestly can't remember seeing that MUI knob control anywhere before, so let's put this down to a case of "Great minds think alike" shall we? :-)